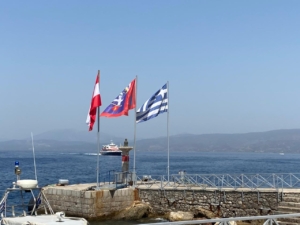 As part of the anniversary events, a scientific conference on “Austrian Philhellenism in the Greek Revolution” took place, as well as a concert of classical music. The event was addressed by the Mayor of Hydra, Mr. George Koukoudakis and the Ambassador of Austria in Athens, Μs. Mag. Hermine Poppeller.

The conference was coordinated by Mr. George Koukoudakis. The speakers of the conference were the historian Dr. David Schriffl from the Austrian Foreign Affairs Ministry, with a speech on the “200 years Greece and Austria – thoughts on and beyond the War of Independence”, and the historian and member of the scientific committee of SHP, Angeliki Papagiannopoulou, who referred to the Austrian Philhellenes who supported the Greek struggle for Independence. Ms. Papagiannopoulou also presented the initiatives by SHP and the Philhellenism Museum for the erection of a Monument in Athens, to honor the Philhellenes, as well as the creation of an anniversary medal to honor the Austrian Philhellene, Anton von Prokesch, in collaboration with the Zografeio School in Epirus.

The conference was followed by a music concert by the Auner Quartett in Vienna, which was coordinated by the music conductor and composer Ms. Konstantia Gourzi. The following works were performed:

KONSTANTIA GOURZI: Anájikon, the Angel in the Blue Garden: I. The Blue Rose, II. The Blue Bird, III. The Blue Moon, a. the bright side, b. Turning, c. the dark side

Austrian Philhellenes participated in the Philhellenic movement of the time and in military operations in Greece in favor of the Greeks. This important initiative of the Municipality of Hydra gave the opportunity to highlight their essential contribution to the Greek Struggle for Independence. Austria and Greece cooperate today with mutual respect within the framework of a United Europe, which largely owes its existence to the great legacy left by the European Philhellenes.

The Mayor, Mr. George Koukoudakis implements a series of pioneering actions of high quality and aesthetics, which promote internationally the history and the culture of the region and Greece, placing Hydra at the center of an international interest. SHP supports the work of the Municipality of Hydra, participating in a series of events around Philhellenism.

Exhibition of the Philhellenism Museum in Andros
Scroll to top