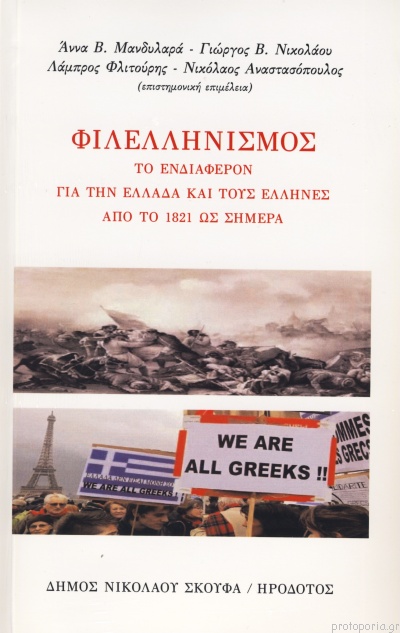 HELLENICISM: THE INTEREST FOR GREECE AND THE GREEKS FROM 1821 UNTIL TODAY

The journey of historiography always begins from the present. The economic crisis of recent years has taken Greece out of the obscurity of prosperity and placed it in the first -favorable- news of the world news media. Today’s “interest in Greece and the Greeks” looks like the “negative” of the “photograph” of philhellenism. Irony of the story or just its repetition as a “joke”; For the historian it means neither of the two only that the present urges him to rediscover places that were considered recorded. Philhellenism, like the Greek revolution, was one of the favorite subjects of Greek historiography for many years after its manifestation and occupied important Greek and foreign historians. Of course, the historiographical interest has not remained undiminished until today, as issues of economic, social and cultural history have been established as dominant and pioneering, in relation to issues of political history, in the field of humanities. In recent years, interest in political history issues has renewed, enriched by the sources and methods of the other approaches. The young historian does not aspire to do better than his predecessors, but tries to explore some unknown paths, to “weed out” some old ones and thus to complete, albeit imperfectly, the huge map of the whole, living, history. We consider that this is the great contribution of the scientists, who took part in the international conference “Philhellenism. – Anna V. Mandylara – Lambros Flitouris “. (From the presentation on the back of the book)