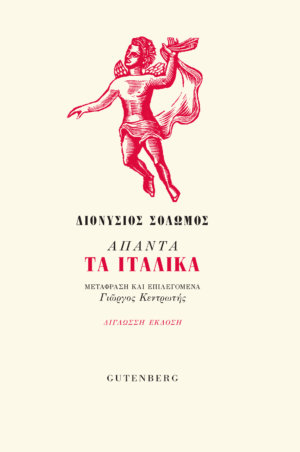 Dante, Petrarch and Foscolo are selectively related to the Italian-language work of Solomos with key inspiration from Homer, Shakespeare and Schiller. Tertsines, sonnets, octaves and odes, serious and satirical poems, finished or saved in a state of design, love poems, topical and opportunistic, religious compositions and thoughtful essays make up the body of a great creation, which began to be put together since his youth in Italy, continued with his return to Zakynthos and reached its peak in Corfu during the last decade of his life. The rhythmic and metrical translation of these poems is suggested as the pre-eminently solo idea of “in modo misto genuino”, which it is articulated “in a mixed but legal way”. The present edition with the translations of all the Italian works of Solomos is purely poetic and has been performed programmatically and consciously in imitation of his Greek-language poetic work: as if an old musical piece of work is being performed today with instruments of the time.

1821-2021: Hellas of the Hellenes Two centuries of national suffering in the...
Scroll to top