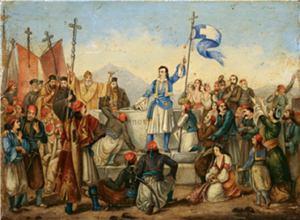 What is the Philhellenism Museum?

May 18 is the International Museum Day, and we take the opportunity on this occasion to remind the mission of the Society for Hellenism and Philhellenism (SHP) and the Philhellenism Museum.

The goal of the Philhellenism Museum is to present through 3.000 paintings, art objects, books, documents, medals, letters, personal objects, images – lithographs, etc. the birth and evolution of Philhellenism, but also the critical role that it played for the liberation of Greece.

The Museum aspires to answer through experiential navigations, to the Greek and foreign visitors, a series of important questions. Here are some of them:

The answers to these questions form an integral part of modern Greek history and it is a matter of principle for Greece to know this history, to promote it and to pay tribute to those who deserve it.

At the same time, however, the Museum of Philhellenism aspires to emphasize another important dimension.

Professor Jacques Bouchard, Director of the Modern Greek Studies Program at the University of Montreal in Canada, explains: “For me Greece represents Hellenism’s anchorage through the ages and the Holy Land of the West“.

So why do foreign tourists, but also students from all over the world, crowd in the archeological sites of Greece? Does this act constitute, indirectly or directly, consciously or unconsciously, the “pilgrimage of the citizen of the Western world, to what constitutes the Holy Place of Western civilization”? Isn’t it what the first trip of Lord Byron (and so many other famous and anonymous) to Greece represent? Isn’t it what the work of Byron Childe Harold’s pilgrimage is about?

Greece is the center of a large cultural ecosystem.

The goal of SHP and the Museum on Philhellenism is to allow the whole planet, and especially the societies that are inspired by Western culture and rely on it, to realize that they have a place and an equal role on the side of the Greeks, who continue to be the guardians of the universal humanistic values ​​of freedom and democracy.

Our aim is to build relations of friendship and cooperation with our allies around the world, to whom we will always remind that we honor what their ancestors offered to us, and that they continue to have the same motivation to support Greece, the cradle and the Holy Land of their own culture.

Our aim is to launch a new Philhellenic movement of the 21st century.

SHP and the Museum on Philhellenism aim to fulfil this mission.

Belgian Philhellenes and fighters in the Greek Revolution – On the occasion...