The staff guided the Ambassador to the premises of the Museum and presented to her the exhibits, the history of the philhellenic movement, and the important role played by the British philhellenes who fought bravely on the side of the Greeks as volunteers or supported the action of the philhellenic committees in London and in other cities in the United Kingdom.

The Society for Hellenism and Philhellenism (SHP) referred to Lord Byron, but also to the crucial role played by the British politician, Foreign Minister and Prime Minister George Canning, for the liberation of Greece.

In parallel, SHP presented the world’s largest collection of personal belongings of Lord Byron and Byron’s art, the pistols of the great Philhellene and founder of the Greek Navy, Frank Abney Hastings, the diary of a British warship that took part in the naval battle of Navarino, one of the two known bonds, of the loans that Greece received from the United Kingdom in 1824, etc.

SHP presented to the Ambassador the model of the Philhellenes monument that will be placed in the center of Athens, and two anniversary medals issued on the occasion of the 200th anniversary of the Greek Revolution, in honor of Lord Byron and Frank Abney Hastings.

Ambassador Kate Smith stated
“I am proud of the contribution of Britain and my compatriots to the final successful outcome of the Greek Revolution.  Many different personalities believed in the Greek cause and actively supported the Greek Struggle.  Initiatives such as those of SHP are extremely important because they remind people of the shared history and highlight shared values and principle that underpin our bilateral relations to this day.”

SHP assured the Ambassador that it will continue together with the Museum of Philhellenism, to promote with their work, the common cultural values ​​of Greece and the United Kingdom, and the continuous philhellenism as a virtue, to serve the constant progress of our societies. 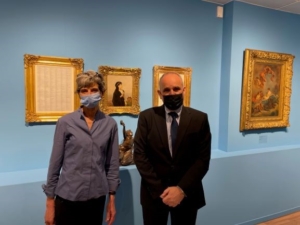 The Ambassador of Montenegro visits the Philhellenism Museum